Consumer influence is a key topic in behavioral economics, where heuristics, framing, and market inefficiencies impact how consumers make decisions.

Define the concept of heuristics, and recognize the relevance of influences on decision-making

As a field of study, heuristics are one of the more interesting and useful areas to consider when looking at decision making. Heuristics are simple, efficient rules and processes that humans use to form judgments and select between various options. For example, people often use constructs like logic, probability, and rational choice theory to determine the best among many options.

If you think about it, most decisions have an almost infinite number of opportunity costs (i.e. alternative options for the utilization of time and/or capital). As a result, almost every decision will have a high number of potential choices. For example, a health conscious consumer will use logic and rationality to purchase a soft drink that isn’t packed full of sugar. As a soft drink manufacturer with an understanding of the heuristics of this target market, creating an option that is low cost, low sugar would appeal to that particular type of of consumer.

As an organization, particularly as an advertiser, the objective is to identify what is important to a consumer in terms of how they will make a purchasing decision. Filling their decision making needs, and aligning with their process of heuristics, is a task that requires knowledge of key consumers, an understanding of what’s important to them, and the ability to be the  best option among many.

Framing is another interesting consumer influence. Framing is basically just how people and societies organize, communicate, and perceive reality. Think of it as the consumer’s frame of reference, which is influenced by mass media, friends, family, religion, education, and just about everything else in the social structure.

As an ethical advertiser at an organization, framing is the opportunity to ensure that the stereotypes, perceptions, and assumptions about the organization’s brand are accurate and aligned with what the company strives for and believes in. Red Bull does a lot of work with extreme sports, because they believe that their product and that lifestyle fit together well. They want to be framed within the context of social icons in daring exploits (at least, this is how the person writing this frames Red Bull).

Finally, there are also market inefficiencies in consumer influence. All this means is that not all decisions are necessarily rational or built on a predictable assumption. Sometimes people make irrational purchasing decisions, and that has to be considered when determining what might (or might not) influence consumer behavior. Other market inefficiencies include intervention from governments, unfair competition (monopolies), and a variety of other unique factors which may render a consumer decision unpredictable.

In order for an organization to have a positive impact on a target market, they must understand what influences the decision-making process of the individuals within that segment. By understanding heuristics, market inefficiencies, and framing, an organization can interact with consumers in an authentic, organic, and relevant way to better inform prospective consumers on the benefits they could receive for purchasing a given product or service. 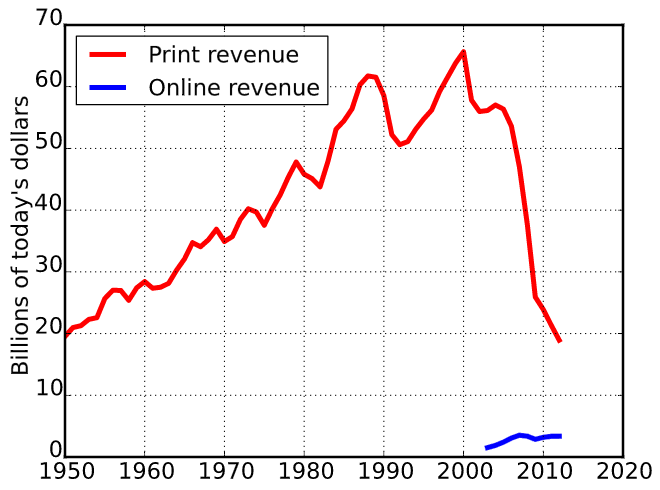 The Decline of Newspaper Advertising: This image demonstrates an important concept in framing. Understanding what influences decisions in a given segment is critical to speaking in the right formats. Newspapers have declined significantly as a source of influence, and therefore organizations pursuing target markets that don’t read newspapers should refrain from utilizing them as a source of influence.