Determining a marketing budget requires an understanding of the cost of producing campaigns and the expected (or actual) return from the advertising campaign.

Differentiate between fixed and variable budgeting strategies in advertising, and recognize the way advertising investments have changed

Advertising is one aspect of the broader marketing strategy, and is funded (and constrained) by the resources available for promotional endeavors. Advertising budgets can be considered from a wide variety of perspectives, but are more often than not looked at as individual campaigns. Each advertising campaign has a budget constraint placed upon it, including the cost of developing assets (filming a commercial, for example), the cost of distributing this asset, and the overall expected return on investment from this asset.

In this situation, determining a budget for an advertising campaign is placing a fixed amount of capital into the advertising budget (annually, or on a per campaign basis) with the expectation that it will add value. Under this form of budgeting, the amount in the budget will  be established based on the cost of creating the desired assets, not specifically on the return on investment that is being obtained. This is a fixed budgeting approach.

With the advent of consistent and easily applied ad tracking, particularly with online media, the justification of advertising budgets has grown increasingly precise and stringent. For the production and placement of an online video commercial, for example, an organization can easily figure out how many people have watched the video, how many viewers have converted to customers, and the average cost per conversion.

Considering the above mentioned factors of modern advertising, advertising campaign budgets are most often created based on an expected return. This is done through creating forecasts. A forecast is simply a prediction of how something will perform, in this situation the advertising campaign. To create a forecast for a campaign, the organization can run small, iterative tests within the target segment on different platforms to see how it performs. Let’s consider a quick example to understand this concept a bit more clearly:

You have a small company. You want to advertise on Facebook to promote it. You sell coffee mugs with goofy pictures and great quotes on them. Each mug costs about $5 to produce. You sell them for $10 each (shipping is paid by the consumer). With taxes and your time and effort, you are likely to make $3 off of each mug sold. That leaves you with $2 per user to spend on getting a sale. Your advertising budget, from a variable point of view, is $2 or less per sale. 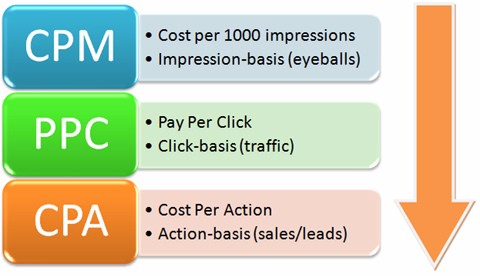 Determinants of Advertising Budgets: This image demonstrates the evolution of metrics, which directly relates to how advertising budgets are derived. In short, understanding how many people see, engage with, or act upon an ad will directly impact the budget that advertising campaign will receive.

On Facebook, you can get your ad seen by 1,000 for $20. That’s, on average, $0.02 per impression (or customer who sees your advertising campaign). Not bad, right? However, seeing an ad isn’t the same as making a purchase. In fact, only about 10% of the people who see your ad end up going to your website. And only 10% of the people who visit your website after the ad make a purchase! That means of the 1,000 people who see your ad, 100 go to your website and 10 make a purchase. As it will cost $20 for those 1,000 views, and you only get 10 purchases, you are paying $2 per purchase. This meets your target (but only barely!). Your average cost may go down if the market is big, and your targeting improves. The average cost could also go up, however, as you saturate your target segment.

As a result, the advertising budget for this campaign can be increased until you begin paying more per average purchase. In this case, an advertising budget is variable and changing over time to take into account learnings in real time.