In Chapter 1 “Foundations for Small Business”, customer value, cash flow, and digital technology and the e-environment were compared to various parts of the human body and overall health. This analogy was made because these themes are viewed as essential to the survival of any small business in the twenty-first century. Individually, these threads may not ensure survival, but taken together, the probability of surviving and prospering increases tremendously. Their importance is so great for a twenty-first century enterprise that they are not only embedded in each chapter but also highlighted in each chapter. Throughout the text, each chapter’s topic will be reviewed through the prism of these three threads.

Focusing on Providing Value to the Customer

Customer loyalty can have several positive outcomes. Loyalty will result in increased sales from particular customers. This does more than generate additional revenue; as the business comes to better understand its loyal customers, the cost of serving those customers will decrease. Increased sales, with declining costs, translate into a significant boost in cash flow. Customer loyalty also has the benefit of generating positive word-of-mouth support for a business. Word-of-mouth advertising can be one of the most powerful forms of advertising and can be seen as a form of free advertising. It has been estimated that word-of-mouth advertising is the primary factor in 20–50 percent of all purchasing decisions. A study by the US office of consumer affairs (formally known as the Federal Trade Commission) indicated that satisfied customers are likely to tell five other customers about their positive experiences.James L. Heskitt, W. Earl Sasser, and Leonard A. Schlesinger, The Service Profit Chain (New York: Free Press, 1997): 88. It is particularly powerful in the case of first-time buyers or with expensive items and those items that require extensive research before purchase.Colette Weil, “Word-of-Mouth Marketing,” Home Care Magazine 33, no. 1 (2010): 49.Positive word-of-mouth advertising coming from loyal customers can generate additional sales, which in turn enhances cash flow. The creation of superior customer value combined with an intelligent cost control system inevitably produces superior cash flow. 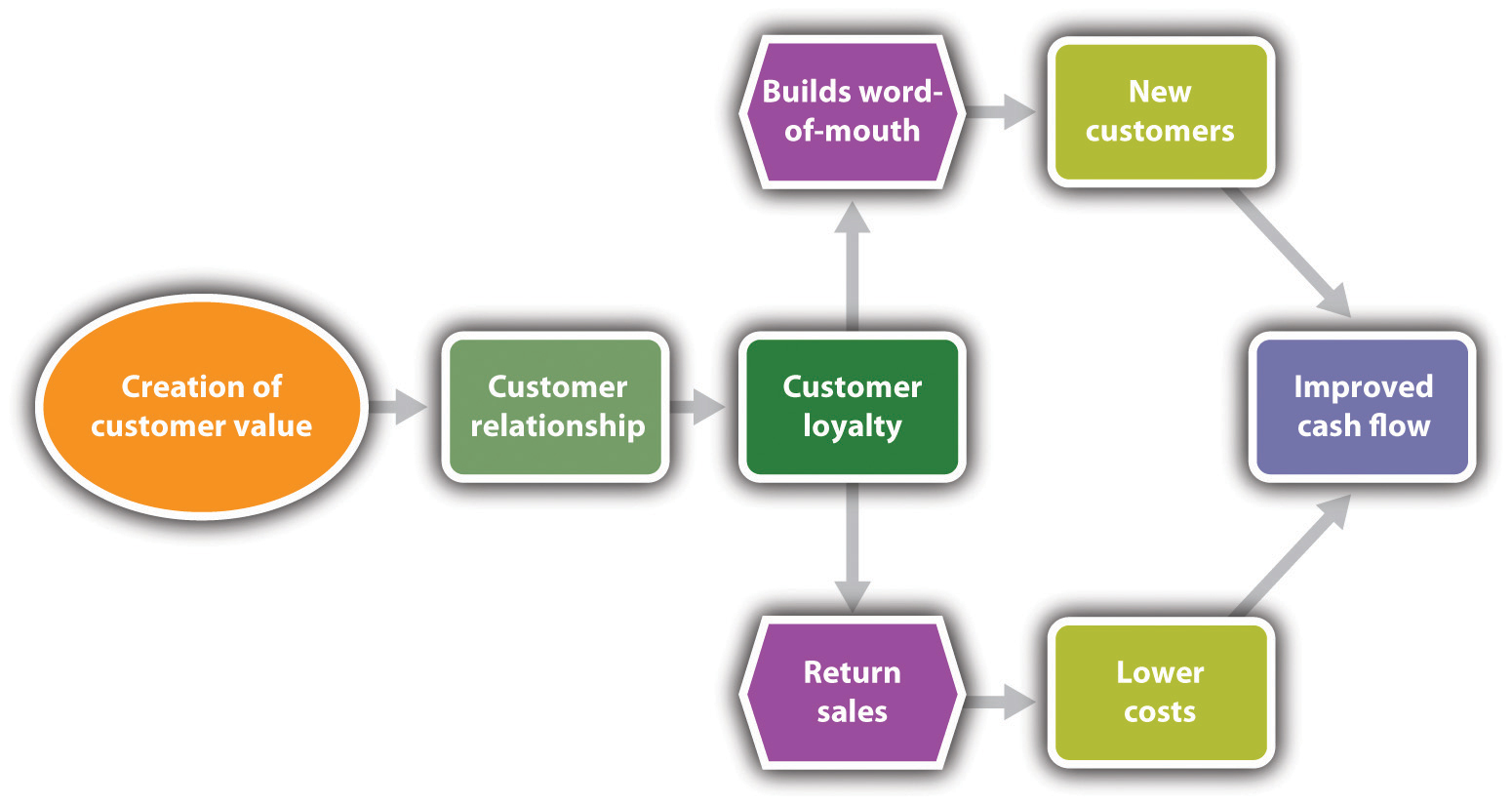 In the last decade, firms desiring to better understand the customer’s notion of perceived value relied on customer relationship management (CRM) software. Customer relationship managementrefers to a service approach that hopes to build a long-term and sustainable relationship with customers that has value for both the customer and the company. It is a generic term covering different software and browser applications that collect information about customers and organize it in a way that may be used effectively by management. This term will be referred to repeatedly throughout this text. CRM can assist small businesses with respect to customer value in the following ways:“CRM (Customer Relationship Management,” About.com, accessed October 8, 2011, sbinfocanada.about.com/cs/marketing/g/crm.htm.

Although originally designed for large corporations with large budgets, CRM is now available to many firms in the small business environment. In addition to being expensive, original fees-first CRM packages were far too complex for small businesses.Maria Verlengia, “CRM for the Small Business, Part 1: When Is It Time to Invest?,” CRMBuyer, February 16, 2010, accessed October 8, 2011, www.crmbuyer.com/story/69349.html. Now there are many CRM packages that are specifically dedicated to the small business environment.

To maximize the benefits of the CRM package, several factors should be considered. Small businesses should have a clear idea as to their requirements for the CRM solution. Some questions that should be considered are as follows:Maria Verlengia, “CRM for the Small Business, Part 2: Choosing the right CRM Tool,” CRMBuyer, February 23, 2010, accessed October 8, 2011, www.crmbuyer.com/story/69402.html.

In some ways, integrating the CRM package may be easier in the small business than in large business because you can overcome some bureaucratic hurdles. However, you must always recognize that the successful implementation of any software package is highly dependent on your employees.Maria Verlengia, “CRM for the Small Business, Part 4: Getting the New System Up and Running,” CRMBuyer, March 9, 2010, accessed October 8, 2011, www.crmbuyer.com/story/69502.html%22.

Perhaps the greatest incentive for small businesses to adopt CRM packages is the advent of cloud computing. Cloud computing, also known as SaaS (software as a service), refers to the situation in which vendor software does not reside on the computer system of a small business.“Great Customer Relations Management Tools,” St. Germane, accessed June 1, 2012, http://www.stgermaine.ca/great-crm-customer-relationship-management-tools/. All aspects of the system, from maintenance to backups, are the responsibility of the vendor. This minimizes the need for computing capability by the small business. Cloud computing can significantly reduce the course of acquiring and maintaining such computer programs.

The failure to accurately understand a customer’s notion of perceived value is the surest recipe for complete disaster. This may be a large requirement because in many cases customers may be quite unsure about their own notion of value or have difficulty in explicitly articulating that notion. One would think that larger firms—those with much greater resources—would be in a better position to clearly identify their customers’ notion of value. This does not seem to be the case, however, with all large firms. Even they may stumble in attempting to develop products and services that they believe will meet their customers’ concept of value. In this feature, several noticeable product failures are identified. Almost every failure came from a large corporation. This is because we are much more familiar with the failures of large corporations that invest considerable time and effort into the introduction of new products and services. There is far less press given to the failures of small businesses that misread or misunderstand their customers’ notion of perceived value.

Perhaps the most famous company failure to adequately gauge customers’ notion of value revolved around the introduction of New Coke. In 1985, Coca-Cola was under great pressure, losing market share to its major rival, Pepsi. In an effort to recapture market share, particularly among the younger segment of the market, Coca-Cola initiated one of the largest market research projects of its time. It conducted extensive taste tests throughout the nation and investigated the possibility of introducing a new formula for Coke. The results from the taste tests were positively skewed toward a sweeter version. There was some debate whether this should be an additional option to the Coke line of products or whether it should replace the standard formula for Coke. Although there were some negative indications about this new formula from focus groups, Coke decided to begin a major introduction of New Coke, but it was universally considered a major disaster. Public reaction, particularly in the South, was very negative toward New Coke. A lot of this negative reaction stemmed from the fact that Coke had become an iconic product in the nation, particularly in southern regions. Hundreds of thousands of people called and wrote to Coca-Cola expressing their dissatisfaction with this decision.Constance L. Hayes, The Real Thing: Truth and Power at the Coca-Cola Company (New York: Random House, 2004), 211. Coca-Cola failed to recognize the emotional and social components of value for a significant number of its customers.

Many firms fail to realize that they have established, in the eyes of customers, a very strong sense of how a particular company provides value. These companies may wish to diversify their product or service line while at the same time attempting to exploit their brand name. However, customers may perceive the companies as being so closely identified with the original product that any attempt at diversification may be difficult, if not guaranteed to be a failure. Some examples of this are as follows: Smith & Wesson, noted for handguns, attempted to sell a line of mountain bikes in 2002; Coors beer attempted to sell bottled water; and Colgate toothpaste tried to produce a line of products known as Colgate Kitchen Entrées.“The Top 25 Biggest Product Flops of All Time,” Daily Finance, accessed December 2, 2011, www.dailyfinance.com/photos/top-25-biggest-product-flops-of-all-time.

Companies may produce products that run directly counter to their customers’ notion of perceived value. McDonald’s produces value for its customers by offering fast food and a family-friendly environment. Several years ago, in an effort to capture a different segment of the market, McDonald’s introduced the Arch Deluxe hamburger, which was supposedly designed for more adult tastes. Even with a $100 million marketing campaign, McDonald’s was unable to “sell” this product to its customers.

One health management organization invested more than one third of $1 million on a computerized member information service. The intention was that this would be more efficient, thus providing greater benefit value to customers. Their mistake was not recognizing that members preferred conversing with human beings. Customers did not want to use a computerized system.Scott MacStravic, “Questions of Value in Healthcare,” Marketing Health Services 17, no. 4 (1997): 50. Although customers of health-care organizations appreciate factors such as ease of access and reliability, they tend to view with greater importance and value the perceived expression of human compassion.

The dry cleaning business industry in the United States is extremely fragmented. The largest 50 firms control only 40 percent of the total industry’s business. This translates into a simple fact: dry cleaning is still the domain of small business owners, with nearly 35,000 establishments throughout the United States. A decade ago, two firms wanted to change the structure of the industry. Both companies thought that they would be able to provide unique sources of value to customers. Mixell Technologies operates a franchise—Hanger’s Cleaners—that focuses on environmentally responsible dry cleaning. Dry cleaning normally involves some fairly volatile chemicals. Hanger’s Cleaners used a new process developed by Mixell Technology. The belief was that customers would respond to this much more environmentally friendly technology. Initially, the cost of this technology was two to three times the cost of normal dry cleaning equipment. One of the major investors in this firm was Ken Langone, a cofounder of Home Depot. In the same time frame, Tom Stemberg, the founder of Staples, was investing in a dry cleaning franchise called Zoots. Their focus on customer value was the ability to have employees pick up clothes for dry cleaning and drop off the clean clothes at the customer’s home residence or work.“An Analysis of the Competitiveness Strategies of Zoots,” Cebu Ecommerce Writing Consultancy, accessed June 1, 2012, http://cebuecommerce.info/an-analysis -of-the-competitive-strategies-of-zoots-the-cleaner-cleaner/. Neither business prospered. Mixell has moved on to other applications of its technologies. Zoots has significantly reduced its number of outlets. The reality was that dry cleaning establishments produce low margins and require long hours and close identification with customers. Unfortunately for both businesses, even though they had an experienced executive staff, they failed to correctly identify the true sources of customer value.Companydatabase.org, accessed June 1, 2012, http://companydatabase.org/c/ recyclables-pick-up-service/products-services/zoots-corporation.html.