Social media websites and applications allow users to create and exchange user-generated content on the web.

What is Social Media?

Social media are interactive platforms where content is created, distributed and shared by individuals on the web. Professors Andreas Kaplan and Michael Haenlein of the ESCP European Business School define social media as “a group of Internet-based applications that build on the ideological and technological foundations of Web 2.0, and that allow the creation and exchange of user-generated content. ” Social media websites and applications allow users to create and exchange user-generated content where people talk, share information, participate and network through technologies such as blogs and social networking sites. Within the last decade, social media has become one of the most powerful sources for news updates, online collaboration, networking, viral marketing and entertainment. 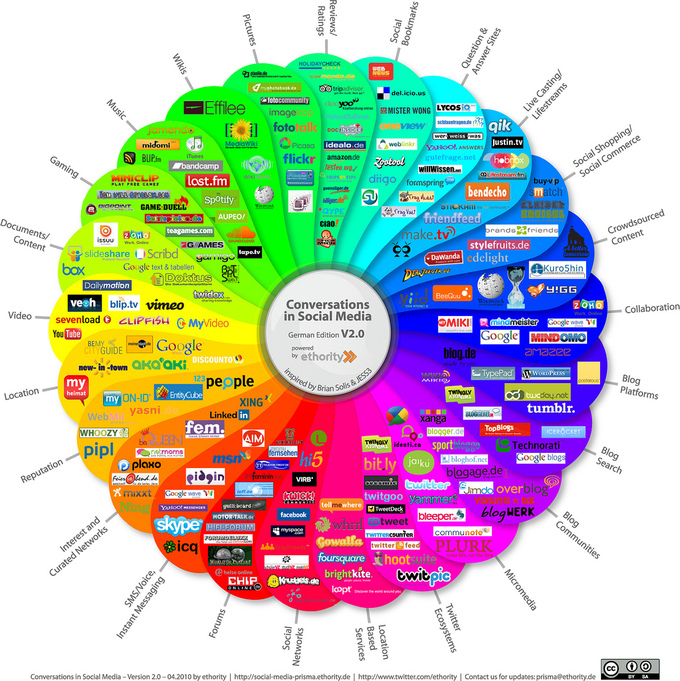 Before the term Web 2.0 was coined in 1999, Internet pages featured mostly static content such as text and graphics. Websites operated on Web 1.0 technologies, where website hosts and owners were the primary content contributors. Online information targeted a mostly passive audience that received rather than contributed content. However, with the introduction of Web 2.0 Internet technologies around the turn of the 21st century, social media venues such as blogs began to allow users to interact and collaborate with each other in virtual communities. This more open, communal method of social media dialogue contrasted significantly with the top-down approach that characterized the early years of the web.

Specifically, social media began meeting the characteristics of Web 2.0 websites, providing a rich user experience, dynamic content, scalability, openness and collective intelligence. Active social media users could take advantage of various features that allowed them to ‘like,’ create and post images, and upload videos and text. Users could then share this information, either with a select group of friends or publicly across the web. However, this has also opened up social media websites to spamming, trolling and flaming by unscrupulous or less mature users. Nevertheless, social media has grown rapidly in the U.S. and around the world due to its blending of technology and social interaction for the co-creation of value.

Some of the most popular current forms of social media are social networking websites such as Facebook, which surpassed over one billion active monthly users in October 2012. There are several types of online platforms classified under the vast umbrella of social media. These categories include:

Social Networks: Social networking websites allow users to build web pages featuring personal portfolios and interests. These pages are used to connect with friends, colleagues and other users in order to share media, content and communications. Examples of social networks include Facebook, LinkedIn, MySpace and Bebo.

Visual social networks are becoming more popular, with Instagram having now surpassed Twitter in its amount of users. Data has shown that a tweet that includes an image has a 150% more chance of being shared. There are also new networks such as Snapchat and Periscope, that are slowly growing in terms of popularity, especially with the younger generations.

Web blogs: Some of the oldest and most popular forms of social media are blogs. Blogs are often viewed as online journals that order content chronologically, or by date, month, year and category. Users can also maintain “vlogs,” or video blogs, featuring shared or homemade videos. Blogging websites include WordPress, Blogger and Tumblr.

Microblogs: Microblogs are blogging tools that feature short posts, as opposed to journal-style posts. Users are usually restricted to posting a few lines of text, or uploading individual images and videos. Microblogging is particularly common for posting quick updates and distributing content via mobile devices. Notable microblogging sites include Twitter and Tumblr. However, social networks such as Facebook, Google+, LinkedIn and MySpace also have their own microblogging features.

Wikis: Wiki websites allow a community of people to add and edit content in a community-based database. One of the best-known wikis is Wikipedia.

Podcasts: Podcasts are audio and video files available through subscription services such as Apple iTunes. The term “podcast” is a neologism derived from “broadcast” and “pod” (as in “iPod”), since Podcasts are often listened to on portable media players.

Other types of social media include the following: