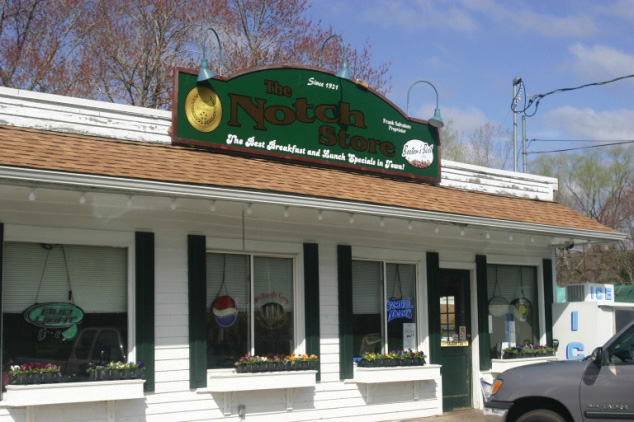 No small business, or for that matter no large business, becomes a landmark and community-gathering place overnight. It takes time along with some very sharp management skills. In the case of the Notch Store, a local legend in Cheshire, Connecticut, it took ninety years and three generations of family members.

The business began in 1921 when Pauline Salvatore recognized a business opportunity. Her husband Mike worked in the nearby quarry, and she recognized that the employees needed a location where they could buy groceries for their lunch or to bring home for dinner. She began to sell them from her living room. Soon the business located to a facility next to her home. The name Notch Store came from its use in the quarry.

A few years later, Mike left the quarry and began to work with Pauline. Over the years, the Notch Store evolved as customer needs changed. They began to expand their offerings. The physical store was enlarged. A gasoline pump was installed, and for several years, one wall of the store carried auto parts.

In 1967, Mike and Pauline’s son Frank and his wife Josephine took over the operation of the business. In the 1970s, the Notch Store extended its offerings to include deli items and lunches. It even offered a homemade cider every fall. The business grew and included its third generation of Salvatores—Frank Jr.

In the early 1990s, Frank Jr. was in charge of operations. Like any business man, he was open to suggestions from others, including his employees. One woman who worked for Frank Jr. suggested that he add breakfast sandwiches to the menu. To make these sandwiches, Frank Jr. needed a restaurant-quality stove. In one of those strange twists of life, Frank Jr. had a friend who knew Joe Namath and his wife. The Namaths were building a new home, and Joe’s wife did not like the stove in the home. Frank Jr. acquired it, and since then, the breakfast sandwich offerings have become a major staple in the Notch Store.

No business develops without encountering problems, and the Notch Store was no exception. Several years ago, a number of customers complained that they had become ill from the Notch’s cider. This was followed by several lawsuits. For most businesses, this might have been a fatal crisis and financial ruin. Fortunately, years before, Frank Jr. had listened to his brother Robert’s advice (Robert was in the insurance industry). The Notch Store had $2.3 million in insurance coverage, which was more than enough to ensure its survival. For several reasons, including recognition of the risk of serving food to the public, the Notch Store has adopted a limited liability corporation format. Even with the best of financial planning and risk reduction strategies, many businesses have to deal with factors beyond their control. The recent economic downturn has meant that there is a significant reduction in new homes being built in Cheshire. This means that there are far fewer builders buying breakfasts and lunches, but Frank Jr. is coping with a small line of credit at a local bank. The future is still bright for the Notch Store and so is the possibility of it continuing into a fourth generation.Frank Salvatore (owner), in discussion with the authors.