Evaluating the demographic profile of a country can help assess whether or not there is demand for the product or service being marketed.

Relate the uses of demographic evaluation to global marketing

Marketers typically combine several variables to define a demographic profile. A demographic profile (often shortened to a “demographic”) is a term used in marketing and broadcasting to describe a demographic grouping or a market segment. This typically involves age bands (as teenagers do not wish to purchase denture fixant), social class bands (as the rich may want different products than middle and lower classes, and may be willing to pay more) and gender (partially because different physical attributes require different hygiene and clothing products, and partially because of the male/female mindsets). It can also include religious affiliations, income brackets, and a variety of other characteristics used to separate a country’s population into groups similar to a company’s core customer. A demographic profile also provides enough information about the typical member of this group to create a mental picture of this hypothetical aggregate. For example, a marketer might speak of the single, female, middle-class, age 18 to 24, college-educated demographic.

Country of Birth : Demographics can be measured in a variety of ways. The map shows an estimation of Sweden’s foreign-born residents in 2001.

Researchers typically have two objectives in this regard: first, to determine what segments or subgroups exist in the overall population; and second, to create a clear and complete picture of the characteristics displayed by typical members of each segment. Once these profiles are constructed, they can be used to develop a marketing strategy and marketing plan. The five types of demographics for marketing are age, gender, income level, race, and ethnicity.

After evaluating the demographic information, determining what segment or subgroup exists within the population, recommendations are made to change, increase, decrease or expand on the type of goods or services offered. Marketers data may alter the way or where a product or service is sold in order to reach a market segment that has the most potential as buyers.

A demographic profile can be used to determine when and where advertising should be placed so as to achieve maximum results. In all such cases, it is important that the advertiser get the most results for their money, and so careful research is done to match the demographic profile of the target market to the demographic profile of the advertising medium. For instance, shortly after the cancellation of Star Trek in 1969, NBC’s marketing department complained that it was premature. They explained that their newly instituted demographic audience profiling techniques indicated that the series’ main young urban audience was highly desirable for advertisers. In 1971, CBS acted on their own marketing department’s demographic findings about their television network’s programming and canceled several series that appealed primarily to older and rural audiences. This move was nicknamed “the rural purge. ”

A good way to figure out the intended demographic of a television show, TV channel, or magazine is to study the ads that accompany it. For example, in the United States, the television program “The Price is Right” most frequently airs from 11 a.m. to Noon. The commercials on it (besides the use of product placement in the show itself) are often for things like arthritis pain relievers and diapers. This indicates that the target demographics are senior citizens and parents with young children, both of whom would be home at that time of day and see that show. Another example would be MTV, with its many ads for digital audio players, indicating that the channel is targeted to young adults and teenagers and/or fans of music.

Most demographic information is also culturally based. The generational cohort information above, for example, applies primarily to North America (and to Western Europe, to a lesser extent), and it may be unfruitful to generalize conclusions more widely as different nations face different situations and potential challenges.

The natural resources, infrastructure, and technology of a nation will determine the ease and viability of entering that country’s market.

Outline the impact natural resources, infrastructure and technology has on new markets within the global marketing environment

Natural resources are materials and components (something that can be used) that can be found within the environment. They occur naturally within environments that exist relatively undisturbed by mankind. A natural resource is often characterized by amounts of biodiversity and geo-diversity existent in various ecosystems. Some of them are essential for our survival while most are used for satisfying our wants. Every man-made product is composed of natural resources at its fundamental level. A natural resource may exist as a separate entity, such as fresh water, or as a living organism, such as fish. It may exist in an alternate form which must be processed to obtain the resource such as metal ores, oil, and most forms of energy. There is much debate worldwide over natural resource allocations, partly due to increasing scarcity but also because the exportation of natural resources is the basis for many economies. Natural resources that can be found everywhere, such as sunlight and air, are known as ubiquitous resources. However, most resources are not ubiquitous and only occur in small sporadic areas; these resources are known as localized resources. There are very few resources that are considered inexhaustible – solar radiation, geothermal energy, and air (though access to clean air may not be). The vast majority of resources are exhaustible, which means they have a finite quantity, and can be depleted if managed improperly.

A country’s abundant natural resources will help determine what types of businesses can achieve the highest profitability there due to access to low-cost inputs. For example, a country with abundant arable land and government farming subsidies may support companies wanting to go into organic food production. Other environmental factors such as demographics and demand will also weigh in on a company’s potential success in a country.

Infrastructure are basic physical and organizational structures needed for the operation of a society or enterprise, or the services and facilities necessary for an economy to function. It can be generally defined as the set of interconnected structural elements that provide a framework supporting an entire structure of development. It is an important term for judging a country or region’s development. The term typically refers to the technical structures that support a society, such as roads, bridges, water supply, sewers, electrical grids, telecommunications, and so forth.Viewed functionally, infrastructure facilitates the production of goods and services and the distribution of finished products to markets, as well as basic social services such as schools and hospitals. For example, roads enable the transport of raw materials to a factory. In military parlance, the term refers to the buildings and permanent installations necessary for the support, redeployment, and operation of military forces.

A country’s infrastructure will help determine the ease of doing business within that nation. For example, a country with poor road conditions and intense traffic may not be the best place to start a business that requires goods to be transported from city to city by land. 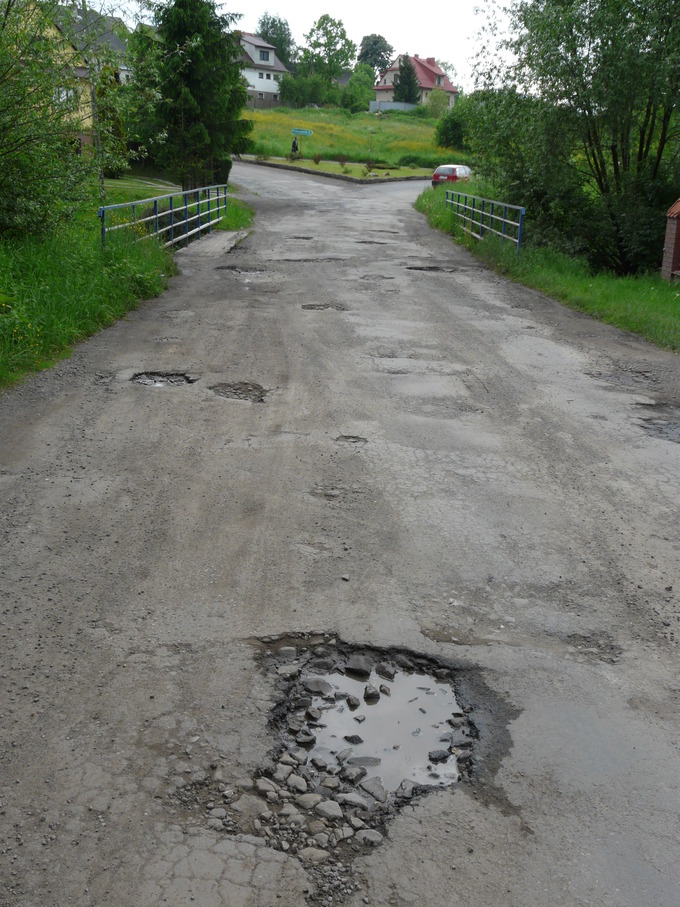 Infrastructure: Poor road infrastructure, like potholes, can create difficulties for businesses that rely on road transportation.

A country’s technological capabilities will help determine what types of operations are possible in that nation. For example, in a country where people are not used to operating computers would not be an ideal place for a customer support call center.